Hello, I am working on section 10 and am having troubles running ingest modules a second time after the first time had an error with the correlation engine not having a central repository defined.

It might have just run really fast. The ingest progress bar appears in the lower right of the screen - the “Status Area” in the first screenshot on this page: http://sleuthkit.org/autopsy/docs/user-docs/4.15.0/uilayout_page.html . When you add a data source and run ingest, the progress bar in the dialog is only showing the progress of adding the data source.

You can check if hash lookup ran by selecting any file in the data source and seeing if it has a hash value listed in the MD5 column in the result viewer. Exif Parser may have generated some Exif artifacts.

Actually I’m having the exact same issue. The there was no central repository selected, (I don’t remember the course asking me to do this, maybe I’m wrong). Nothing shows up in the interesting files section, but the media card has been imported.

Do you know what’s supposed to show up under Interesting Files? Previous notable items? Devices seen? I’ve never looked at the training.

I’d suggest making a new case and trying again. The correlation engine module doesn’t do anything on its own; it just handles data created by the other ingest modules. So if you run other modules without the correlation engine it may be impossible to get some data into the central repo due in part to de-duping of certain artifacts even if you run everything correctly later.

I believe there is an issue because of the first quiz question
Was an Interesting Item created because a file on the media card was previously marked as notable?

Hmm I’m not sure why you wouldn’t be getting an interesting item. A few things to verify - when you select the file from the laptop data source in the other occurrences tab, is the known status shown as “notable” in red?

When setting up ingest, was the “Flag items previously tagged as notable” checkbox selected? (it should be by default…) 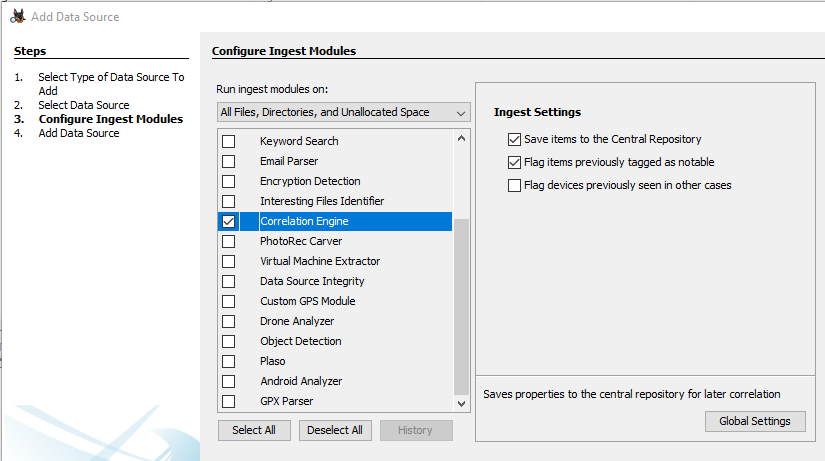 That really should generate an interesting item.